Is this popular question on mycotoxins in oatmeal off-topic?

How to reduce the quantity of (carcinogenic) mycotoxins in oatmeal?

I'm surprised by the amount of attention this question has received. Currently, it has a score of +7, many thoughtful comments, and zero close votes. Indeed, the question is well-worded, backed by ample sources, and its content is of practical interest.

However, from my reading, this question is only tangentially related to biology insomuch that mycotoxins are fungal products. The author suggests that they are not interested in interventions to reduce the amount of mycotoxin-producing fungi in oatmeal, which would be on-topic.

even if the customer store the oats in a dry environment, it's too late: the molds have already grown

In other words, the goal (at our consumer level) is not to stop the growth of the mycotoxins (because it's too late, even if stored in a dry environment), but to destroy/reduce them.

Instead, the question focuses on chemical and physical methods to inactivate / degrade mycotoxins (pressure, heat, sodium bicarbonate). If the question was concerned with degradation of protein toxins or other large biomolecules, I could see how it could be answered from a biological perspective (e.g. by addressing the effects of heat and chemical treatments on protein structure). But mycotoxins are relatively small molecules; see aflatoxin below. 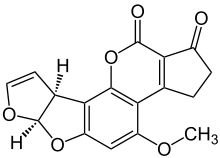 Am I missing something, or does this question belong on Chemistry.SE?