When is it appropriate for a moderator to take a side in an argument and delete only the half of the argument they disagree with?

I do no intend to make this post purely as a rant post (though it may at first come across that way) but rather because I genuinely find myself experiencing what is a definitively poor example of moderation.

On this question asking about the variety of hair colors possible I made what I felt to be a very thorough answer to the question, received a bunch of upvotes, and nobody else made any attempt to offer another answer. Seemingly my answer was in goo dstanding.

Someone asked me a question in the comments which seemed to imply that they didn't even read my answer, because they were asking me why I didn't cover red hair which I actually dedicated 3 paragraphs to talking about. They even linked the Wikipedia page for red hair as though I had no idea what red hair is. Even with the surge of sarcasm I felt bubbling up inside of me I told him in the most jokingly, non-confrontational way that I could that he seemed to not have read my answer. They didn't take to that, so we had the briefest arguments totaling 6 comments total, 3 comments from the both of us. Just to show how mundane the dispute was I'll make a brief transcript here (I'll have to paraphrase what I said since my comments were deleted and I don't remember them word for word):

Him: What about red hair? en.wikipedia.org/wiki/Red_hair

Me: I'm not sure how to reply, I definitely covered that haha

Him: To be clear, I meant "what about red hair in your image showing the spectrum of 'natural hair colour levels'?"

Me: red hair comes as a result of both copies of your MC1R gene carrying deleterious mutations, lacking a single functional copy of MC1R makes you sensitive to UV radiation and causes neurological conditions that aren't very well understood due to the role of MC1R in the brain, hence given how rare it is and the adverse effects it isn't really a "natural" hair color

Him: It occurs in humans in nature. That seems pretty natural to me.

Me: Merriam-Webster defines natural as that which is usual, expected, or normal, which definitely isnt the case in red-hair which associates with diverse bodily consequences due to carrying 2 dysfunctional copies of the MC1R gene, which is all exceptionally rare, which therefore satisfies the definition of "unnatural". Additionally, please stop arguing with me in the comments about what you think

To summarize, the argument stemmed from what seemed to be someone's lack of reading comprehension, then it became an issue of semantics because I'm apparently the only one who's aware that words carry several meanings (even though every time I used the word "natural" in the body of my post I used it in quotation marks to clear up any misunderstandings) and the argument ended when I asked them not to reply again since it was evidently becoming a petty dispute of "I think" vs "you think".

Someone else comments on the answer (not related to that issue) which brings my attention back to the post, and I see this: 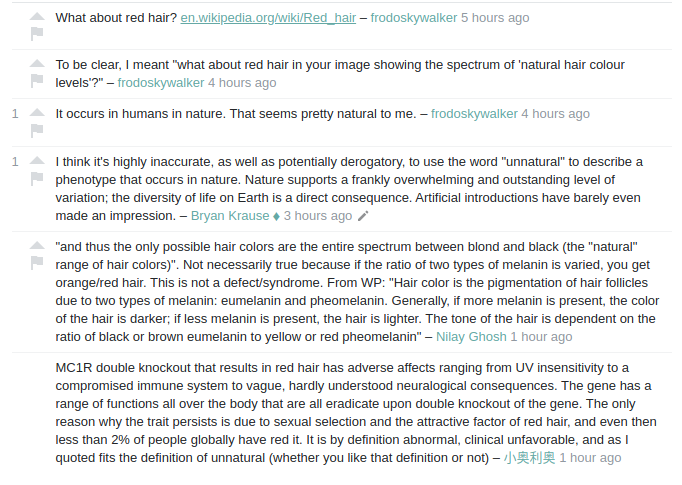 So despite, me not being the one to start the argument, and me being the one to end the argument, and the argument already ending over an hour ago at the time of him seeing the argument, instead of ignoring the issue or deleting the argument altogether this moderator decides he's going to pick a side, give his two cents, and then deleted all of MY comments but leave the other guys. To anybody who read this far I ask, on what platform is this an acceptable form of moderation? Despite me clearly using the term natural in quotation marks and even going so far as to explicitly state which definition of the word I was using, they accuse me of speaking derogatorily of red-headed people (what?) which surely must be easy once he personally delete the context of me using the word!

Unnatural is synonymous with abnormal or irregular, was I supposed to sugar coat it? Am I only allowed to use the terms rare and exceptional ? I'm sorry, it isn't unnatural, its EXTRAORDINARY. 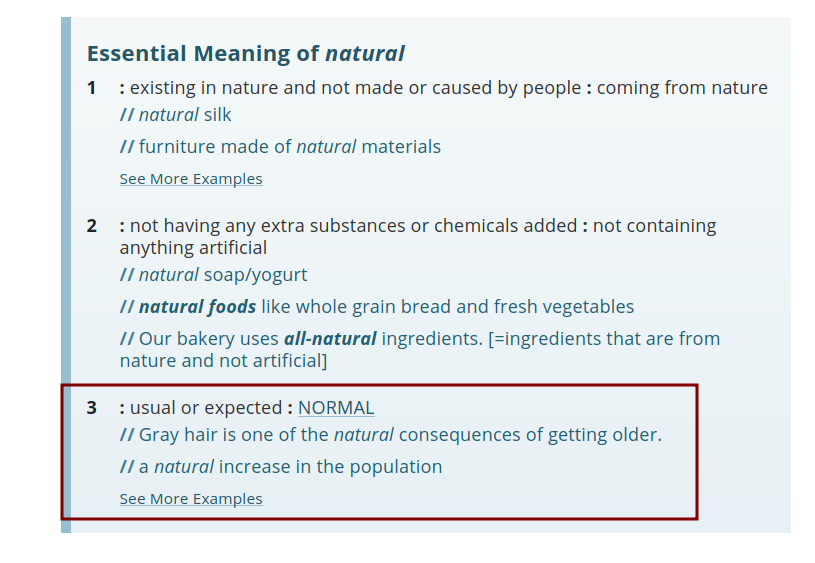 Even with the surge of sarcasm I felt bubbling up inside of me I told him in the most jokingly, non-confrontational way that I could that he seemed to not have read my answer

Don't do this. If someone is rude to you, flag for moderator attention. If someone has overlooked something, respond to them politely or not at all. Don't aim for "jokingly, non-confrontational" - it doesn't work on the internet. A joke seems like it's at the expense of others.

Red hair is natural. Claiming it isn't is offensive to everyone with red hair who inherited red hair just as naturally as you inherited all your own traits. I only deleted those comments.

Do not continue this line of argument.

The title of this meta question, "When is it appropriate for a moderator to take a side in an argument and delete only the half of the argument they disagree with?" misrepresents what happened in reality as much as you misrepresented this comment,

Me: Merriam-Webster defines natural as that which is usual, expected, or normal, which definitely isnt the case in red-hair which associates with diverse bodily consequences due to carrying 2 dysfunctional copies of the MC1R gene, which is all exceptionally rare, which therefore satisfies the definition of "unnatural". Additionally, please stop arguing with me in the comments about what you think

describing it as "jokingly, non-confrontational".

Please consider that you're on a science site, not a linguistic one, and natural may have a different connotation to a scientist than a linguist. Red hair is certainly "natural" in people who did not use hair dye to achieve the color. You were wrong.

But your question is about moderation. There are three ways to publicly handle unhelpful comments: deletion, refutation, and moving a conversation to chat. The private ways seem much more punitive.

Objections to moderation often occur when a moderator is simply doing their job. One of the moderator's functions is to keep the site friendly and inclusional. Your comments infer something unkind - intentional or not - about red-haired people. The moderator did their job. They deleted potentially offensive comments. The fact that you disagree with them does not prove that the moderator took sides and committed an offensive act.

I wonder how you would have reacted if the whole conversation was removed to chat. Often, users think their comments have everlasting wisdom (only the slightest amount of hyperbole here) and should not be toyed with. But on every SE site, comments are ephemeral and can be deleted at any time. That applies to every comment, including mine.

The best response to moderator activity on something you post is to try to learn from it. Though moderators are human and have opinions, their actions very rarely stem from animus, and rarely deviate from site rules as laid out in the help center.

I do not think it appropriate to give questions titles that are veiled attacks on others rather than genuine questions. You are not asking a general question about moderator policy, but are complaining that your comments in a specific exchange have been deleted whereas others have not. This creates an immediate bad impression.

If you wish to ask about a particular case, entitle your question appropriately in the form “Why were my comments on this question deleted...” as others have frequently done. However, unless you feel others have been rude or abusive towards you, I’d let it rest. Having not read the question or the interchange, but seeing the quotations above, the impression I get is over-reaction, even if you are in the right.

2
What to do with wrong or very dubious answers?
9
Can we find a better way to support users who ask questions based on a flawed concept of evolution?
9
Physics borderline questions
4
Why was this question about human monogamy closed?
7
Scientific names in the titles of questions — what to do?
4
Why was I suspended for 30 days for "plagiarism", when I linked to and blockquoted a Reddit comment?
1
What's wrong with this question that was edited to include research?