Graphical Breakdown of BioSE Self Eval

I was playing around with making 3D scatter plots, and needed some data to play with. So I took the results from Oct. Self-Evaluation, but I scored it a different way. I took the net score from the eval ("Rescore") and compared it to the votes of linked question ("Q Vote"), and the votes of the highest voted answer ("A vote").

That gave me the following data table:

Which graphically looks like this (negative Rescore in red): 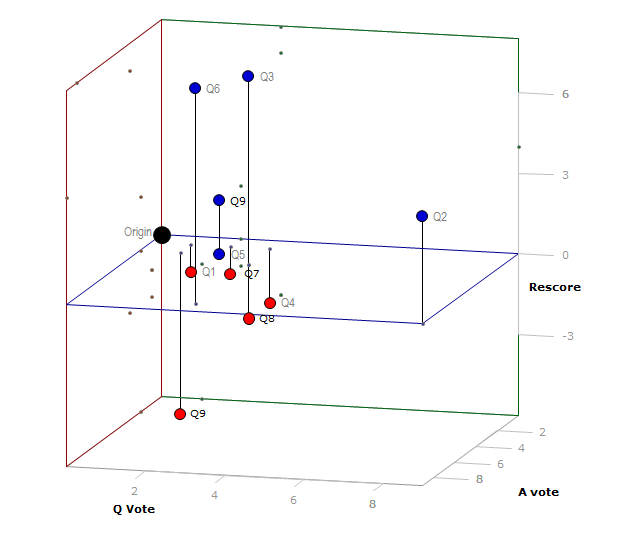 If I have time, I will go back and look at the other self evaluations and see if I can get any patterns to emerge.

But even with these data points, I'm re-evaluating my voting, though I know it has been discussed in depth. Are we voting in a way that reflects the quality we are or are not bringing to the internet? Should we be voting in such a way that it would be reflected in the Rescore?

I didn't have time to participate in the review, so I'm not entirely sure how the questions were selected (I'm assuming randomly of positive voted questions in the last quarter), but I would be curious how this would play out on the site as a whole (which none of us have time to do).

One last graph, the best liner plane fit that I could get in R:

Just some data for thought.

23
Do we need to change voting patterns?
7
Let's get critical: Oct 2013 Site Self-Evaluation

2
Question and self-answering - continued
22
Voting to close a question as off-topic because it is based on a faulty presupposition
4
Let's get critical: Apr 2015 Site Self-Evaluation
2
Should there be a limit of downvotes from one particular user?
17
General quality of BioSE questions vs other SEs
0
What's wrong with this question that was edited to include research?