Over-use of "If a trait would be advantageous to an organism, why hasn't it evolved"

I have been observing the rampant closing of questions based on being a duplicate of "If a trait would be advantageous to an organism, why hasn't it evolved?". I am of the opinion it is currently being (ab)used as an invalid reason to bury valid questions. Not only that, it's overuse is turning it into a cliche. I appreciate the efforts from the community that have gone into this question, but as of now other questions are being funneled into its webs without solid reasons.

I think that "Why did feature F evolve in organism O" is always a bad question. However, in some cases it does hide a good question. So, let's get rid of the bad questions - but if there is a good one hidden, reword to unearth that one. 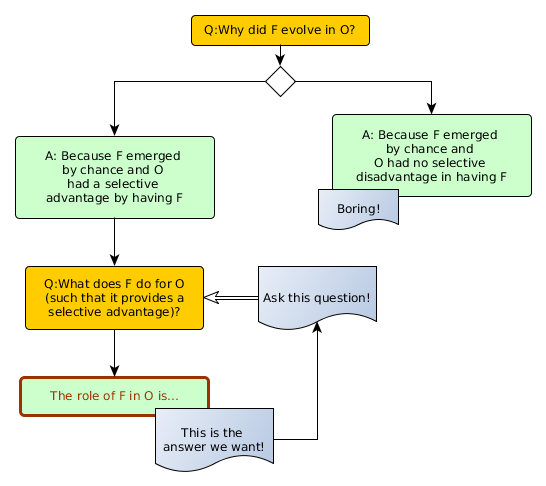 I don't currently see it as overused. But I certainly see your point that we don't want to get rid of all questions which can fit this schema. My view is that something should be done about the "Why did" questions too, because:

The "why did evolve" question is actually a layer of misdirection. It allows a false assumption to take place ("If it has evolved, there must have been a selective advantage for it, so the two questions are equivalent").

We can look through the uninteresting layer of "why did" and reveal the real question beneath it. Reword "Why did F evolove in O" into "What role does F play in O?"

As a bonus, this will spare us from repeating every single time that evolution is not a human engineer and does not go around thinking up optimal solutions. We can still point to the canonical "why not" question when editing to reword, with the suggestion that the OP reads it in order to get background knowledge.

I disagree that this question is an invalid duplicate close.

The final sentence of the question

If it's an advantage either way, why don't bigger life forms like mammals have 6 limbs?

makes the intent of the question pretty clear. It is essentially asking "Why didn't insects lose 2 of their legs / Why didn't animals gain 2 legs if it is advantageous for them to do so?".

The final question (as well as the bulk of the original text) can be easily answered by the "Advantageous trait" question. While your answer was an excellent answer that explained a benefit of the dual-tripod gait, the gait is clearly unnecessary for easy locomotion, as can clearly be seen in all the animals with other numbers of legs that are not multiples of three. bshane's answer covers this in better detail.

While it is true that the dual tripod gait does provide significant stability benefits, the stability is not required for locomotion, and IMO likely evolved after the ancestral insect had its Hox duplication, giving it six legs.

2
Questions about programming/tweaking/using biological software?
9
Can we find a better way to support users who ask questions based on a flawed concept of evolution?
21
Questions asking for evolutionary reasons
0
Policy on questions with two distinct components
1
Would a question asking for speculative answers be allowed?
2
Tag proposal: "troubleshooting"
5
Why was this question about human monogamy closed?
1
A website similar to puzzling but for the sciences
10
Should "Too broad" be used when wanting to "just close it"?